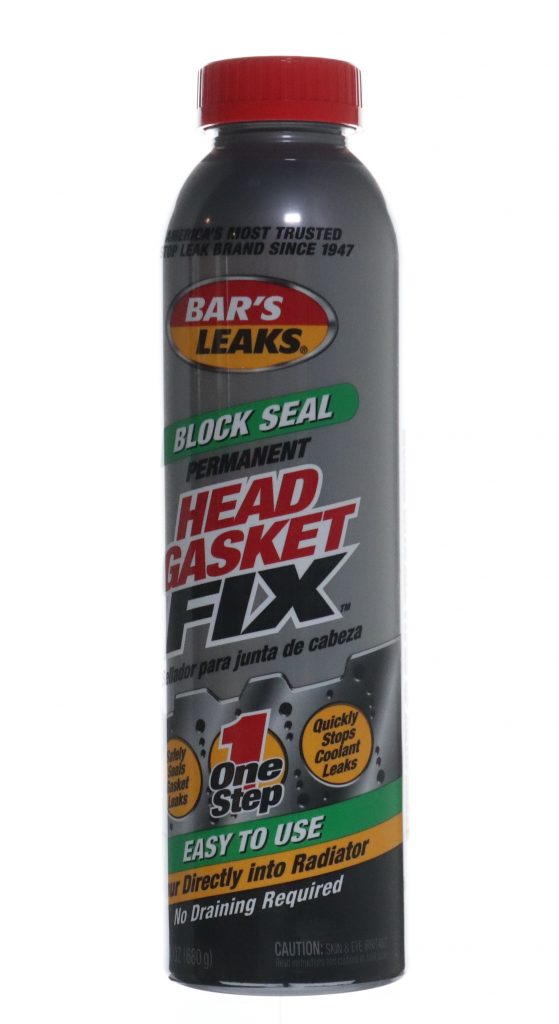 This easy-to-use contains a combination of antifreeze-compatible sodium silicate sealing liquid and various gasket-sealing particles that penetrate gaps and cracks and harden to permanently stop leaks. It’s liquid technology for damaged, leaking or blown head gaskets, and with over two million bottles sold, you can count on it to perform. We have a team of top-flight chemical engineers who are always innovating and pursuing ways to improve our existing products. As auto manufacturers introduce new technologies, we offer new products that will help everyday drivers save time and money through fast and effective solutions.

Find this product near you

Our easy-to-use Bar’s Leaks Head Gasket Fix will not only save you all that cash, but also get you back on the road in less than an hour. At Bar’s Leaks, we specialize in creating chemical repair solutions that are fast, easy, effective and affordable. Rather than spending hundreds or thousands of dollars at the repair shop, you spend just a few dollars — and all without any of the inconvenience.

Using our head gasket repair liquid is easy. Simply follow along with Bobby and Caitlin in our how-to video to safely and quickly get your car back on the road. There’s no reason a blown head gasket should sideline your life.

For nearly 70 years, Bar’s Leaks has served car owners with effective solutions to complicated problems like blown head gaskets and leaks related to engine oil, power steering, cooling systems, transmissions and more. Each product is developed and manufactured right here in the U.S.A., just an hour outside Detroit, and each comes with the promise of ease-of-use and incredible results. While you can find other head gasket repair liquids on the market, other products don’t always fix the problem — and they can sometimes make your issue even worse.

As the best-known chemical repair brand in America, we take it as a point of pride to offer the best blown head gasket fix on the market. When you need a head gasket repair liquid that you can trust to get the job done right, look for the company that’s successfully served the needs of tens of millions of customers over many decades. Trust Bar’s Leaks and our range of head gasket repair liquid and other products.

Find our where to buy your blown head gasket fix today.

I'm always skeptical about additives with big claims. I had a small coolant leak in my #1 cylinder that was causing a rough start up with the smell of burning coolant and a small amount white smoke from the tail pipe. Added Bar's Head Gasket Fix (followed the instructions exactly). Wow, leak SEALED!!! Saved me a $1500 repair (25% of what the car is worth), giving me time to save for my next vehicle.

Wow - incredible fix on my 2003 Subaru Outback !!! Dealer told me my yo-yoing water temp gauge was due to leaking head gasket and would cost approximately $2,000 to fix. Since my Outback was in great shape, only 119,000 miles, but not worth much, I tried the Bar's Leak Head Gasket Fix. Followed the instructions. I had to do two applications, back to back, using half the bottle each time. After the second application - SHAZAMMMM !!! It's been 4 months now and my water temp gauge is solid where it should be and the Outback is still running great ! The best $33 that I have ever spent - THANK YOU Bar's Leak !!! (P.S. I haven't had to go back to the dealership for anything so they don't know - yet ... 😁

Joey
by Joey
Did it's job

Vehicle- '87 Chevy with a 350 ci engine
Issue- losing coolant through the exhaust. It also had white smoke coming from the the tail pipe, as might be expected/indicative of a blown head gasket, cracked block or cracked head.

Solution (s)-Put 11.4oz of liquid glass in the coolant system and noticed about a 30% improvement.
Put 24oz Bar's Leak Block Seal Head Gasket fix and the smoke has all but disappeared (truck is running a little rich) and the coolant system is no longer leaking coolant and is on the road again. Seems to be a solid product.

I had a blown headgasket in my 91 sierra and I flushed my system clean put in the Bar's Leaks with new antifreeze followed the directions and it worked. Running better than ever thanks Bar's for a great product.

I have a 2013 prius I bought cash and in the mornings I was getting the tell tale sign of the prius rattle of death. Went ahead and did the plugs and the coil packs since I was kicking P301 code. Still had the rattle of death then I started noticing a little bit of white smoke coming out the back. $2000 installed to drop a new crate motor in it or instead tried $20 at the local autozone and give this a shot. 2 days later no more rattle of death in the morning. Absolutely amazed and I figure 20 versus 2000 for a crate motor is worth a shot and it WORKED!!!!!. Was going to use the more expensive stuff but watched the video with Scotty Kilmer and he recommended this and hes never led me wrong and all I gotta say is winner winner chicken dinner my urban assault prius is back on the road running grrrrrrreat..

Andan
by Andan
It Worked!

Our beloved 1995 Toyota Previa had been losing coolant slowly for several months and finally started having a bit of a hydrolock on cold starting, accompanied by coolant dribbling out of and exhaust flange. It was either a blown head gasket or the very fine cracks that sometimes develop around the valve seats in the cylinder head of this supercharged engine. It has 240,000 miles on it.

I read up on stop-leak products, and the consensus seems to be that Bar's has the longest history and best track record. I'm usually inclined to go with the premium product in a line, but I emailed Bar's about which of their head gasket fixes was best for our symptoms. They got back to me in a few hours, and I followed up with a call. The tech was very patient and thorough, suggesting that the 1111 product was probably the right one. I was impressed that he made no effort whatsoever to steer me to the premium HG-1, which costs twice as much, and that he explained that the cheaper 1100 required two days and more than a dozen steps because it wasn't compatible with antifreeze.

I told him that I had been adding plain water to top up our losses, and therefore wanted to drain and refill with new antifreeze. He agreed that that would be a good procedure.

I put in the antifreeze and the 1111, topped it up with water, and started the engine. I got the telltale white steam out of the exhaust for about a minute, then it stopped. I never did get heat out of the heater core, so I suspect that it was still a bit low. After 15 minutes with no heat, I was wondering if I should run it more, but the instructions said 15 minutes and let it cool down. On the strength of that, I shut it off and left it overnight.

Next morning, I checked the reservoir and added a bit more water to bring the level up to the full line, then started it. No hydrolock, no steam, no dribble from the exhaust. Took it out for a 20-minute drive at local and highways speeds (up to 75mph). Got heat from the heater after about 5 minutes. Left it overnight again.

Next morning, coolant precisely on the full mark, and the van runs like it got a new lease on life. I wanted to wait a few days to write a review, just to be sure it was the real deal.

This is our third Previa, and we just love this vehicle, which went out of production 22 years ago. The second one developed those cracks, and that was a $2400 repair. This one cost us $22 for the Bar's product and $13 for the jug of antifreeze.

Follow the instructions and let it do its magic. I'm sure there are some situations it can't fix, where the engine is just too far gone, but we were contemplating scrapping this vehicle, which is otherwise in excellent condition for its age, and were able to repair it overnight for less than $50.

As the old song says, I'm a believer!

A shop I trust told me that the cylinders 1 and 4 misfire on my PT Cruiser (201,801 miles) were due to a worn gasket. No way I'd pass emissions and the cost could approach $2,500. I parked the car and considered my options. Then I recalled fixing a radiator leak with Bar's Leaks, and realized Bar's Leaks makes a head gasket repair product! The initial fix corrected one cylinder instantly. The second took more product and heat cycles to fix, with only days left to the emissions test - passed!! WOW!

After being in the automotive industry for almost 40 years I have seen my share of head gasket issues and the chemicals that claimed to fix them. This one works. We have a 1997 Plymouth Breeze 2.0 l sedan with 170,000 miles that developed an external head gasket leak. No overheating or oil/coolant intermix. I researched this product and followed the label instructions. I did need to remove a small amount of coolant in able to add the product then top off. Ran the engine at idle for the specified time with the heat on and let cool. Here we are 30 days later and I have not added coolant and the area under the cylinder head/block area is dry. This is a superior product!!

My '90 Dodge Ram 318 was going through anti-freeze like crazy due to a head gasket leak. A couple of years ago, I gave $26.00 for a can of this stuff at Wal-Mart, and I haven't put anti-freeze in the truck since. Well done, Bar's Leaks!